We’ve made the pilgrimage to Louisville for as long as I can remember, and before that. Several years ago we started following the Kentucky Bourbon Trail. Bourbon, “America’s native spirit,” is a highly prized and protected drink in Kentucky. In 1964, Congress created the Federal Standards of Identity for Bourbon, stipulating that Bourbon must meet these requirements:

– Bourbon must be made of a grain mixture at least 51% corn.

– Bourbon must be 100% natural [nothing other than water added].

– Bourbon must be aged in new, charred oak barrels.

– Bourbon aged for a period less than four years must be labeled with the duration of its aging.

– Bourbon which meets the above requirements and has been aged for a mininum of two years, may [but is not required to] be called Straight Bourbon.

Estimates place 95% of Bourbon production in Kentucky – we aim to drink** only a very tiny amount of that. Of the seven distilleries on the Trail, we’ve toured two: Maker’s Mark [dipped our own bottles in the signature red wax!] and Heaven Hill in Bardstown. Yet to tour are Jim Beam, Buffalo Trace, Four Roses, Wild Turkey and Woodford Reserve. Since the distilleries are clumped in north-central Kentucky, around Frankfort and Bardstown, just south of Louisville, we’ve at least driven past all of them at one point – including the defunct, slightly creepy Old Taylor Distillery. 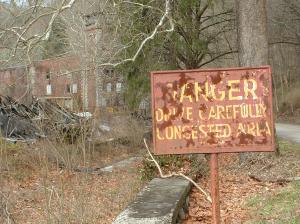 Our only full day in Kentucky this trip was Sunday. Many a trip has left us wanting since most of the distilleries are closed on the Saturday. Didn’t Prohibition end in 1933?

Fortunately Heaven Hill is open on Sundays, for tours and tastings. 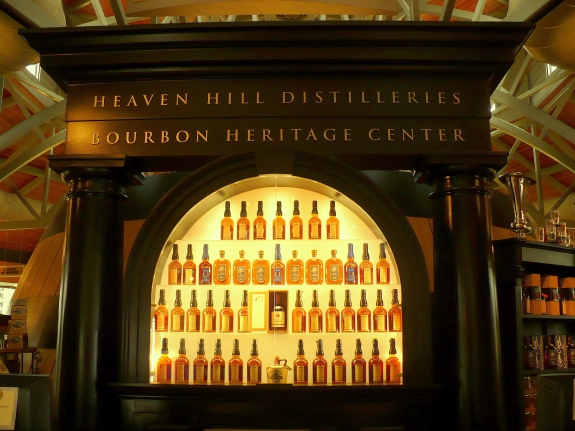 We missed the full tour, but Bill was more than happy to show us and a group of Bourbon-loving young twenty-somethings the film. He then spouted off a few more interesting facts [for instance, among other brands, HH produces Evan Williams, Elijah Craig and Old Fitzgerald] and answered any questions before the tutored tasting. Our ‘tour’ culminated in a high-tech, barrel-shaped tasting room featuring an in-the-round cypress wood bar. With proper coaching the group sipped on Elijah Craig 18-year-old single-barrel and Evan Williams vintage-dated single-barrel [the stars of HH’s fleet, costing upwards of $100] in beautifully handcrafted tasting glasses.

None of the five Workmans present are Bourbon afficionados, but that doesn’t mean we didn’t enjoy our tutored tasting. We sniffed, we swirled, we examined the legs and inspected the hues, we felt the burn. Oh did we feel the burn. Bill taught us to add four [and only four] drops of crick*** water to dilute the Bourbon, allowing you to better taste without that harsh burn – divulged only after our initial sips. Thanks, Bill.

We also learned that the charred white oak barrels of Bourbon are aged in the most unassuming, depressing buildings – rick houses – unsurprisingly prone to blowing up. The lovely black stains creeping up the walls is sugar-eating mold. Cheery.

To round out the tour [and get the Bourbon taste out of our mouths?] we each received a Bourbon pecan truffle – the best thing I tasted all afternoon. Like brownies, Bourbon and all other liquors are wasted on me. Sadly.

*All of which is true, by the way.

**Kentucky law says you can only taste two half-ounce pours of bourbon per day per distiller while driving the Bourbon Trail.

***That’s creek to you readers without southern relatives.