the bounty of Baldwin County

I was über giddy to learn we’d be visiting a dairy during my stay. Cheese makes my world go ’round, remember?

Located in Elberta, Sweet Home Farm is one of only a handful of cheesemakers in Alabama. Off the highway and bumping along a red dirt road, a colorful handmade sign pointed the way to a tiny farmstead. Greeted not by cows, but by chickens and an enormous turkey.

It’s one of the dinkiest storefronts I’ve run across in my search for incredible cheese. What made it seem smaller were the ten other customers crammed inside the 20′ x 15′ shop with us, vying for a chance to taste and buy. One of the patrons told us that SHF is owned by a husband and wife who’ve been doing this since 1985. The shop is only open Friday and Saturday because the pair only make enough cheese to sell during those two days. “Sells out every time. They have very loyal customers and very fine cheeses.”

Very fine indeed. A born-and-bred citizen of “America’s Dairyland,” I know a good cheese when I see, smell and taste one. SHF is clearly a labor of love, keeping the old-ways traditions of cheesemaking alive. This attention to detail, passion for the craft, and care for the land and cows comes through in their high-quality cheeses. 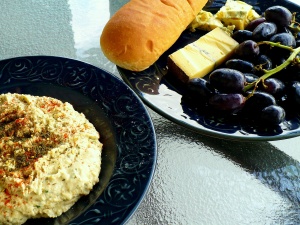 The trio of cheeses, warm French bread, plump tart black grapes, and homemade za’atar and paprika-dusted lemon parsley hummus was our relaxing lunch on the patio.

But I’m jumping around. Before heading home, we poked around a bit more. A fruit stand on the side of the road with several signs boasting fresh strawberries got our attention, so we pulled off and bought a basket. Within minutes every juicy berry had been devoured; the red drips on my leg and running down my arm the only evidence they’d been there in the first place. 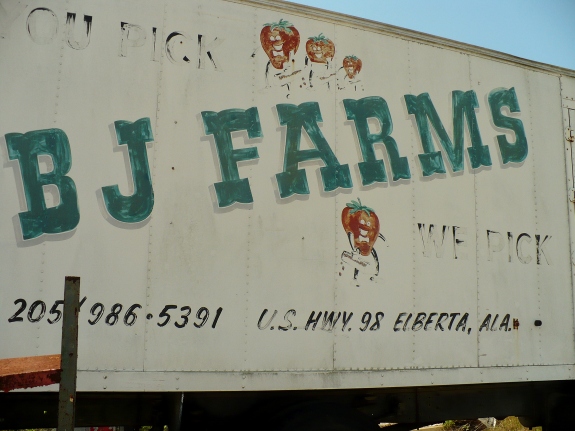 A sign further down led us once more down a red dirt road, this time to farm house and barn. Hillcrest Farm & Vineyard. A tiny old lady waved us in, her two dogs racing over to welcome us. Plainly we were her only customers. She was beaming and positively overjoyed to tell us about the myriad jams, preserves and sauces on display in her barn. Although we were in pursuit of wine, we felt compelled to support her efforts nonetheless. We bought a bottle of blazing four-pepper hot sauce [“I can’t tell you which peppers…” habanero?!], Satsuma marmalade [better than orange!] and a jar of raspberry pear jalapeño jam [surprisingly sweet, great on toast for breakfast].

Who knew there was such a bounty awaiting us in southern Alabama?!