My great grandma Fanny made incredible french toast. It was, without a doubt, the best french toast. Her inexact recipe, as only grandmothers can command, produced a model specimen every time. Thick slices of white bread soaked in an egg, milk, cinnamon and vanilla mixture, browned to perfection in a buttery cast iron skillet. The plates of toast came to the table dusted with powdered sugar — mine more than others. Maple syrup was self-serve, of course, and at that age I loved to drown all my breakfast foods, from pancakes and chocolate chip waffles to cinnamon french toast and sausage links.

Yesterday morning I wanted my great grandma’s french toast. And then I remembered we only have asiago cheese bread right now. He’s always telling me the keys to creating new recipes are innovation and trial and error. Take untraditional ingredients and put them together. If it works, yay! If it’s gross, we swallow hard, don’t tell anyone about it and move on. 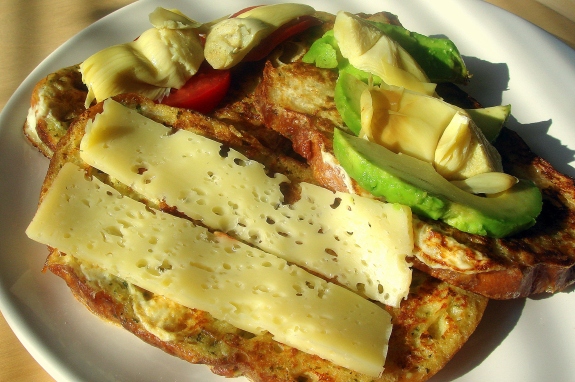 I could even imagine wrapping a couple slices in paper towel for an on-the-go nibble, keeping extras in the fridge for a day or two, easily rewarmed in the microwave, toaster or warm oven.

In an 8″ square or 9×13″ casserole dish, whisk together the whole eggs and egg white, milk and pesto. Preheat a griddle or large skillet (preferably cast iron) over medium heat.

Place a couple bread slices at a time into the casserole dish, letting slices soak up egg mixture for a few seconds, then carefully turn to coat the other side. Soak only as many slices as you will be cooking at one time.

Coat the griddle/skillet lightly with cooking spray and add the egg-soaked bread. Heat slowly until the bottom is golden brown. Turn and brown the other side. Serve hot as is or with toppings. (I really liked the avocado.)