After thick, saucer-sized sirloin burgers with all the fixin’s from the Pelican Lounge* for lunch on Sunday, a light supper was welcome. Very welcome.

I bought two little eight ball squash at the store, especially to be stuffed. But with what? These flavors — smoked sausage, fennel, scallion, figs — play nicely otherwise, and do so as well inside these edible shells. 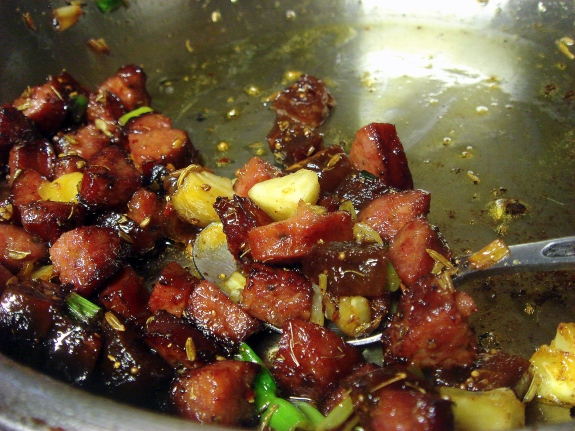 If you’re hungrier than we were, you could add an Israeli couscous or wild rice salad. For a homey side, a slice of warm brown bread smeared with creamy butter.

1 scallion, finely chopped [if you can get your hands on fennel bulb, try adding that instead — 1/4 bulb, coarsely chopped]

2 oz Brie cheese, sliced 1/4″ thick, about 4 slices — you can remove the rind, but we rather like it

Preheat the oven to 350° and prepare a double-boiler.

Cut the top off each squash, 1/2 inch from top; keep lids. With a pointy spoon, dig the flesh carefully out, making sure to not make a hole at the bottom, creating a 1/2 inch-thick shell. Discard seeds if large enough. Chop flesh roughly and set aside for stuffing.

Steam squash shells and lids for 6 minutes or until tender, but still hold their shape. Run cool water over them to stop the cooking process. Set aside.

In a medium skillet, heat the olive oil over medium heat. Add the smoked sausage and fennel seeds and cook until fragrant and warmed through, about 3 minutes. Using a slotted spoon, transfer the sausage to a bowl. Return the skillet to the heat, add the chopped scallion, figs and chopped squash and cook until softened, about 5 minutes. Stir in the lemon juice. Add to the sausage.

Arrange the squash snugly in a baking dish and stuff with the sausage mixture. Top with the lids, cover with foil and bake until the squash are soft, 25 to 30 minutes. Set aside the lids and divide the Brie among the stuffed squash. Bake, uncovered, until the Brie melts, about 5 minutes [I had to broil mine a little at the end to really melt it]. Top with the lids and serve at once.

*We found a way to watch the Packers games: NFL Sunday Ticket on one of the twelve TVs at the Pelican Lounge sports bar out on the island. You wouldn’t believe the die-hard Packers fans in Corpus — cowbells, goofy 80s apparel and a lucky GB helmet. Although ours isn’t the only team with a following. Every NFL city is represented with at least a couple people.